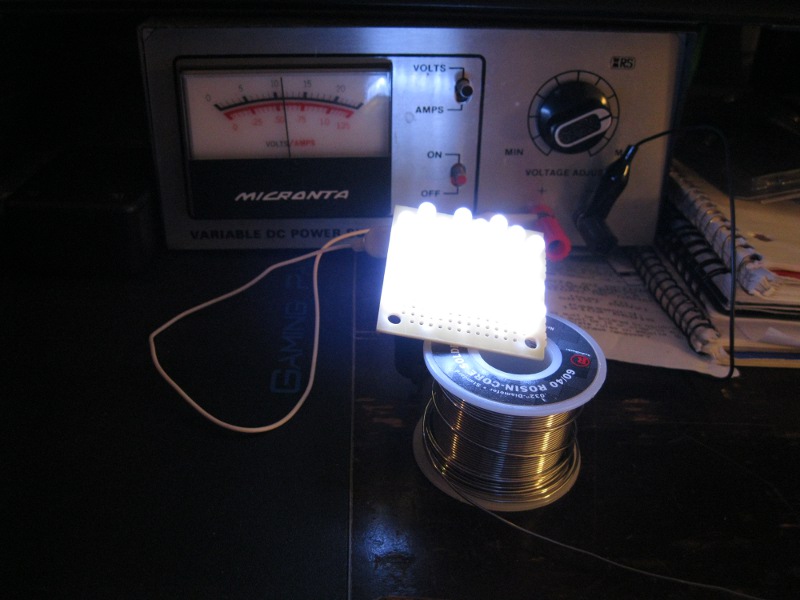 Step by step instructions how to make your own LED light bulb for about $3.

To make your own LED light bulb, you will need a soldering iron and some solder, some LEDs and a pre-drilled circuit board. You will also need an old, burnt out incandescent light bulb. To make a LED light bulb for about three dollars, look online for bulk LEDs. You can find them out of China now for about a dollar with free shipping for a hundred LEDs. The circuit board can be found for about $2. These are pre-drilled with the copper rings on the soldering side. You will also need two pieces of scrap wire about three inches long. 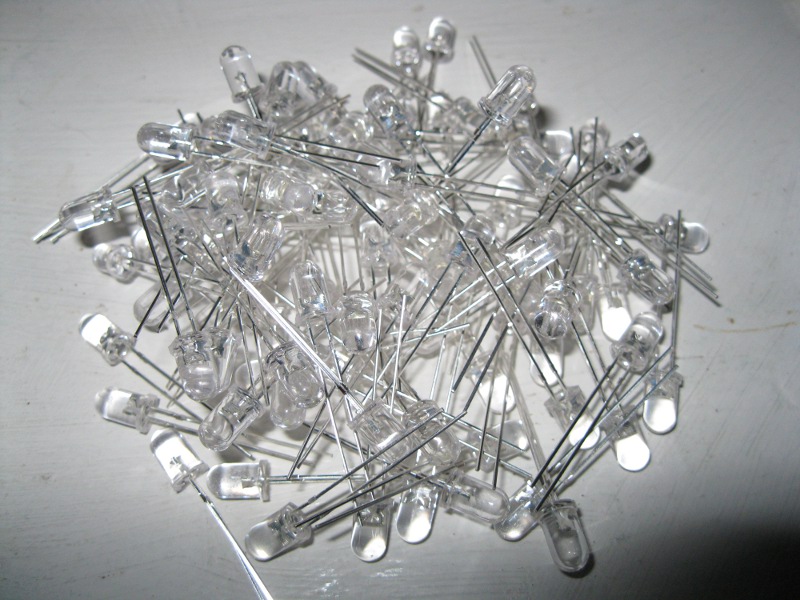 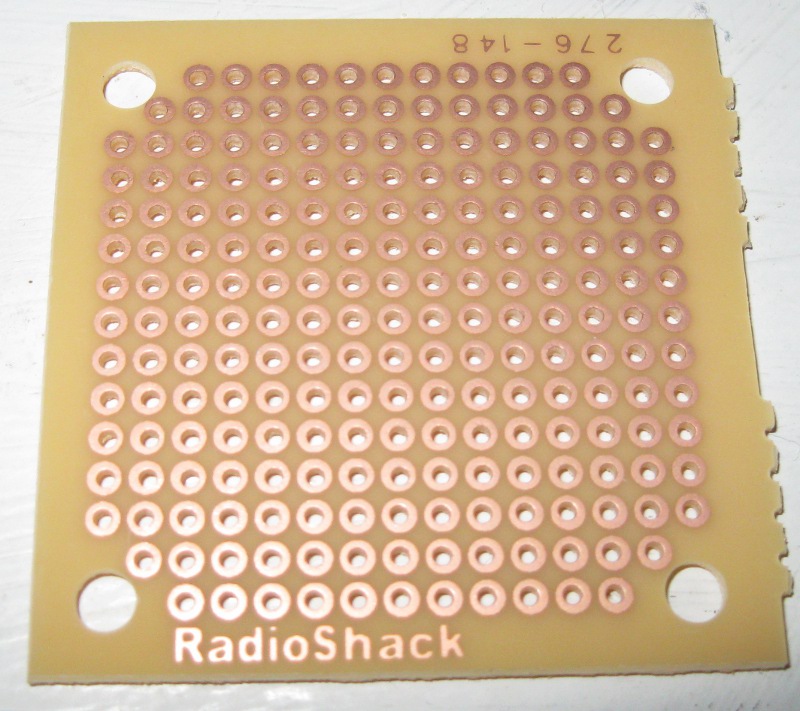 White LEDs require about 3.2 to 3.4 volts each. Your RV or car battery runs between 12 volts to 14 volts. Normally it runs around 12.5 volts to 13 volts on average. To save money, we will not be using a voltage regulator or current limiter for the LED light bulb. Instead, we will use enough LEDs in series to allow them to limit their own current.

If you string 4 LEDs together, plus to minus and plus to minus, then you will have a total voltage of between 12.8 volts and 13.6 volts across the LEDs. By calculating 3.2 volts x 4 LEDs, we get 12.8 volts total. On the high range, 3.4 volts x 4 LEDs gives us 13.6 volts total. Using these calculations, the vehicle or RV average 12.5 volts to 13 volts is perfectly in the range of our LEDs, so no limiting resistor will be needed. Even if the battery does go over 14 volts for a short time, it should not harm the LEDs. They may get a bit warm, but should be fine.

Using the image below as a guide, start solding your LEDs together in rows of 4 starting with the Plus lead and connecting to the next LEDs Minus lead, then Plus, Minus, Plus, Minus. The long leg of an LED is the positive lead.

You can hold your mouse over an image below for a closer view. In the first photo, you see one row of LEDs is soldered in place. You will probably need to skip a hole in between each LED in case they do not fit well.

Look at the second photo to see how to bend the LED legs over to make contact with each other. Cut the legs short and then fold one over to touch the one next to it. This will ensure a good electrical contact. In the third image, you can see that a row of holes was skipped in between rows of LEDs. Also you can see that the rows were staggered a bit to allow room in between LEDs. This also spreads the light pattern a bit when the LED light bulb is finished. 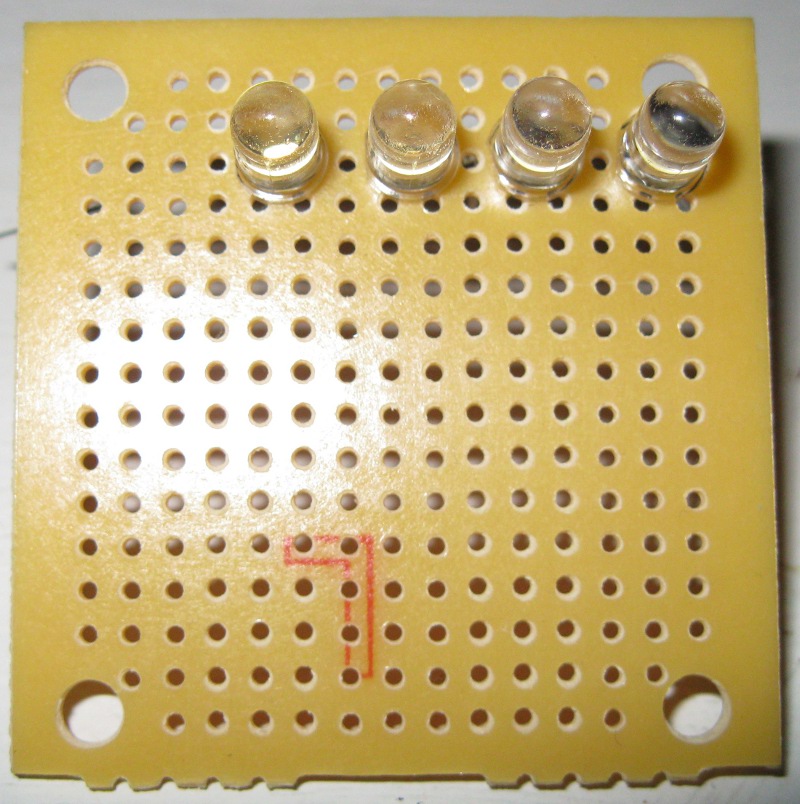 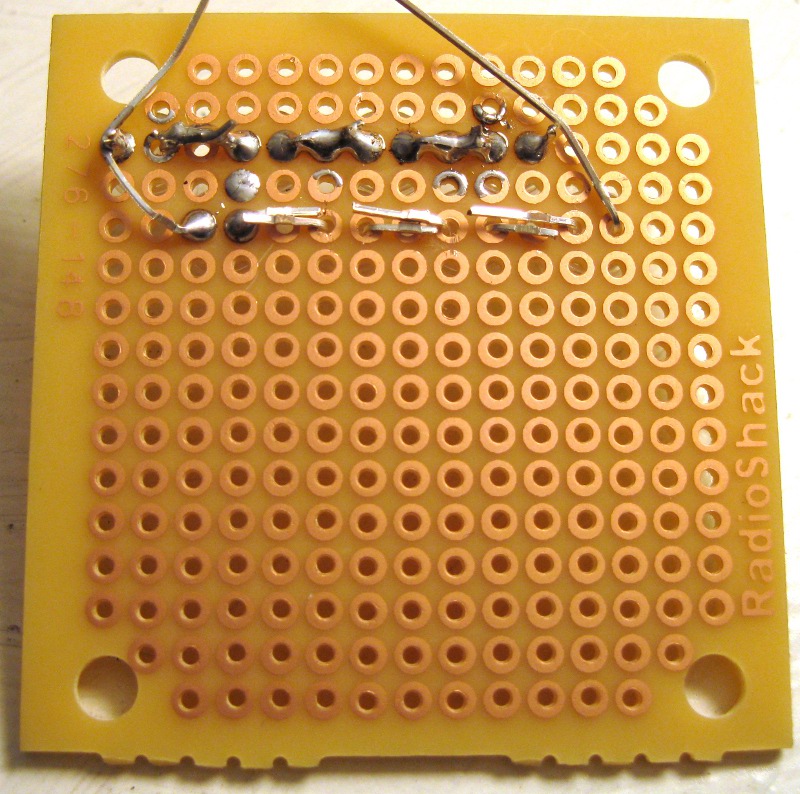 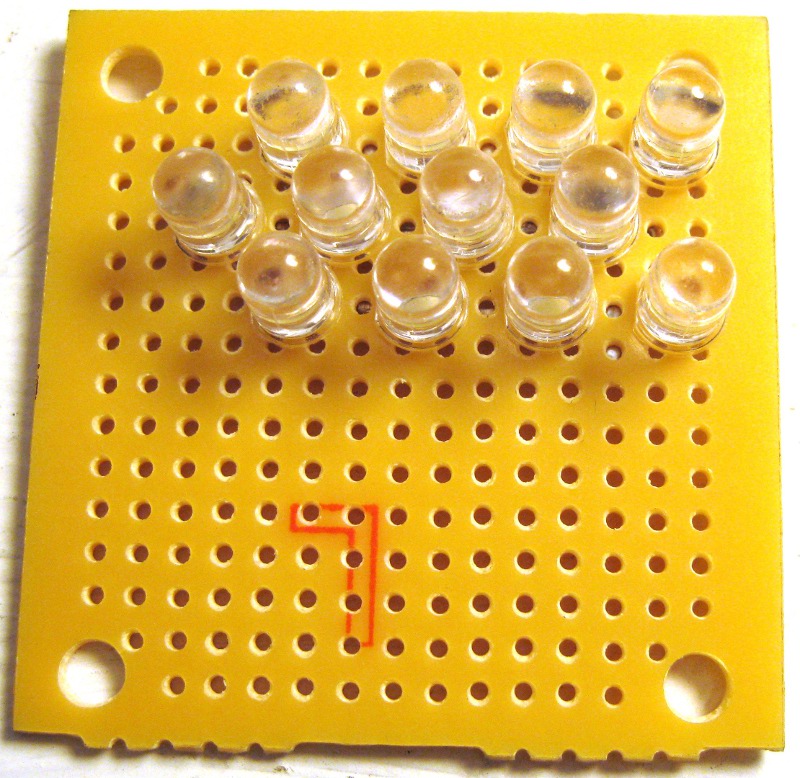 Your LEDs should be positioned on the board as seen in the diagram below. Each row should have four LEDs connected together in series from + to - to + to - and so on.

Refer to the photo below for the next step. As you reach the end of each row, leave the outside LED leg long. Bend it over to reach across to the LED next to it. Zoom in on the photo to see how the LED legs on the outside rows are soldered together along the edges. On the left side will be the positive lead. On the right side is the negative lead. 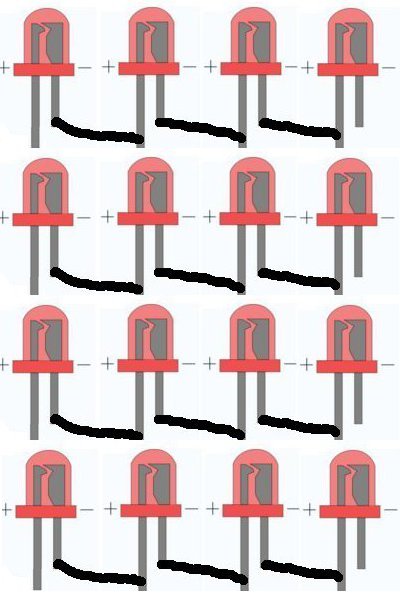 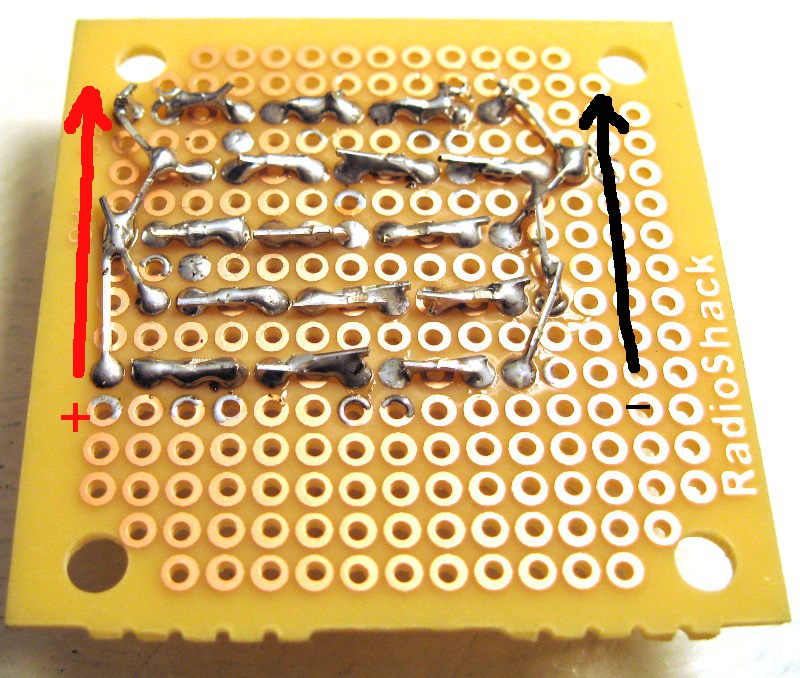 To prevent any problems later and to make sure that the homemade light bulb is coming along well, connect the circuit board to a 12 volt power source (or battery) periodically to test the circuit. This will ensure that all the leads are soldered together well and there are no shorts or bad solder joints. If you wait until the whole lamp is finished to test it, then it will be harder to find the trouble spot.

In the photo below, the voltage is only set to 10 volts and the few LEDs on the board are already putting out a nice amount of light. These are cheaper LEDs, so the light output is a little bit blue tinted. But who cares, at that price. 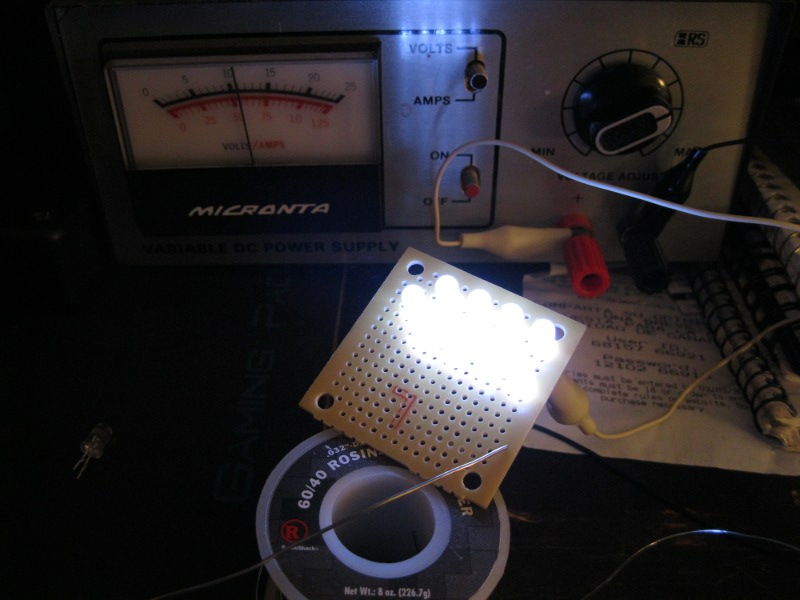 Keep soldering and adding rows to your LED light bulb until the perfboard is full. The one in our example has 8 rows of 4 LEDs for a total of 32 LEDs.

Test your new DIY LED bulb again on the bench to make sure all the solder connections are good. In the photo, you can see that the LED lamp is giving off enough energy to light up even the work surface below the LEDs. That is a lot of light. 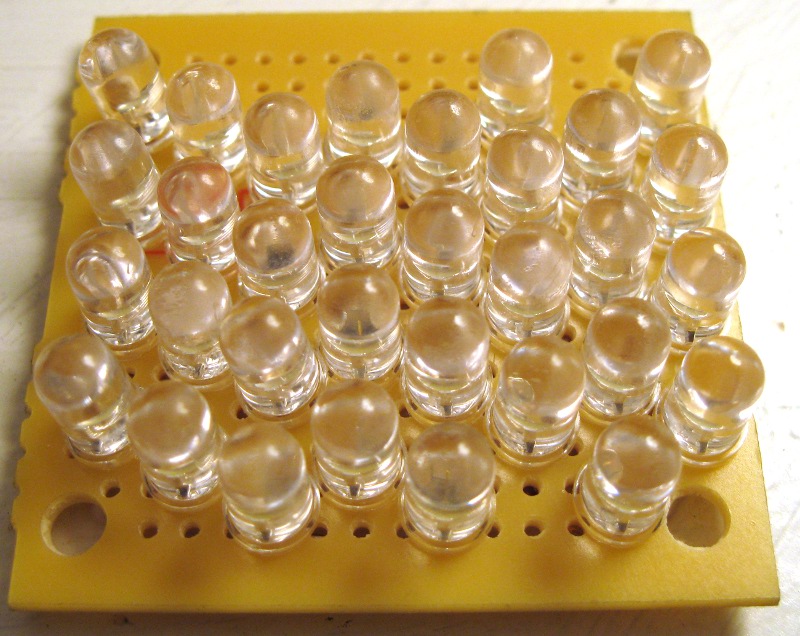 BE VERY CAREFUL when following the next steps. Now you will recycle an old, burned out incandescent light bulb to use its socket for your new LED light bulb. Wrap the old light bulb in a rag, layers of paper or, better yet, an old bubble wrap lined mailing envelope. Gently hit the glass with a small hammer to break the bulb. Now, carefully knock out all of the glass from inside the light bulb. Wear heavy protective gloves when working on this step. You may want to pry out some of the glass with a small screw driver. Gently hold the light bulb socket in a pair of plyers during this step.

Now you should have something that looks like the second photo below. If you broke the original wires, do not worry. You can solder in new ones if needed. Now attach a piece of wire from the positive terminal of your new LED circuit board and run it to the center wire of the light bulb socket. The one that goes to the little lead end on the bottom of the light bulb socket. Then connect the negative terminal of your LED bulb to the other wire of the bulb socket, the one that connects to the outside of the socket.

Your new LED light bulb should look like the one below.

Fill the socket with epoxy or hot glue to secure the wires and be sure they never break due to vibration or stress. To mount the new LED bulb, simply press the bulb into the light socket and twist it as you would a normal incandescent light. Then secure the circuit board with a bit of double sided tape to keep it in place in your lamp. Replace the light cover and enjoy energy efficient light. 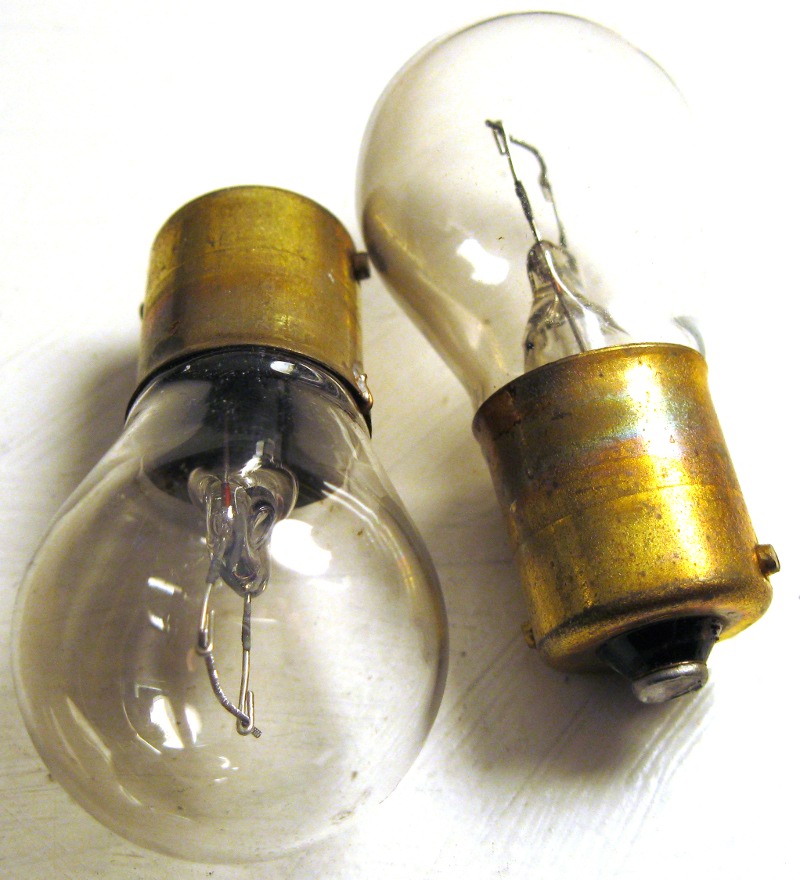 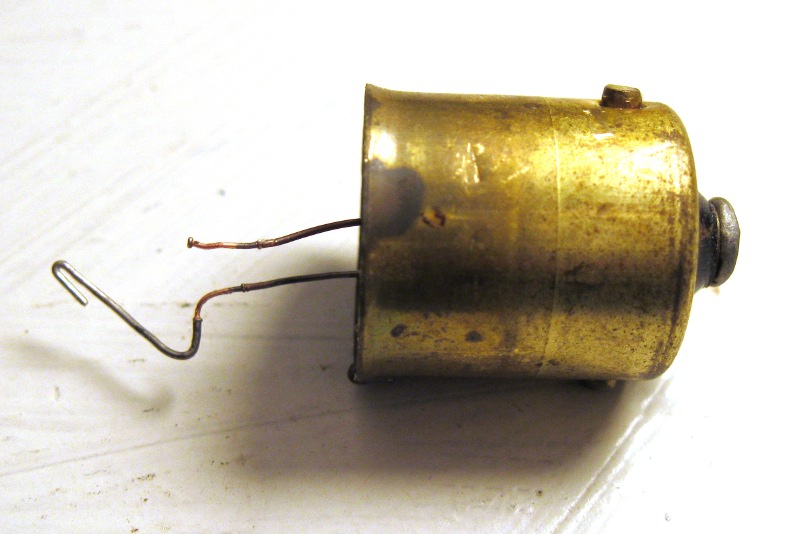 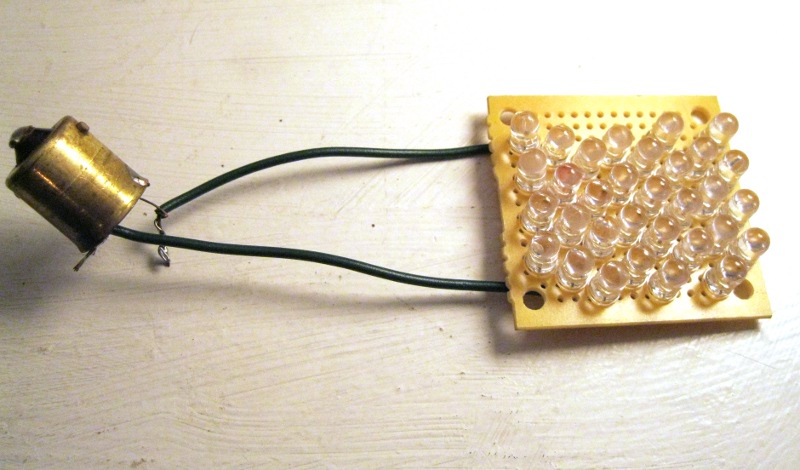 These LEDs are rated at 20,000 MCD each. This gives us a total of 640,000 millicandela of light. This is equal to roughly 100 Lumens, which is the equivalent of the output of your standard 15 Watt incandescent light bulb found in most autos, RVs and campers (first photo above). To convert Lumens to MCD and from MCD to Lumens, you can use our Free Lumens to MCD Calculator

The big difference comes in the energy savings. Your new homemade LED light bulb only burns about 200 mA, which equals about 2.4 Watts. That is a sixth of the power consumption of your standard incandescent light bulb. And your new LED bulb will outlast any incandescent bulb by many years. After a couple years you will see a financial savings as well.

Compare your new homemade LED light bulb to retail versions shown below. They biggest difference is price. You can make your own LED light bulbs for a fraction of the price as the retail versions and they can be tailored to your own needs. Another advantage is if an LED fails on your homemade lamp, you can replace it. If you spend lots of money on retail lights and they fail, then you are out that money. 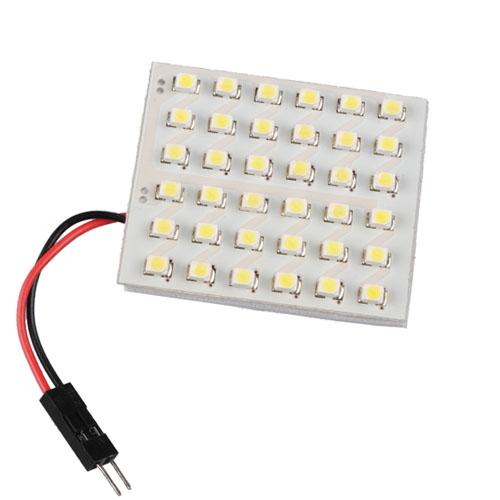 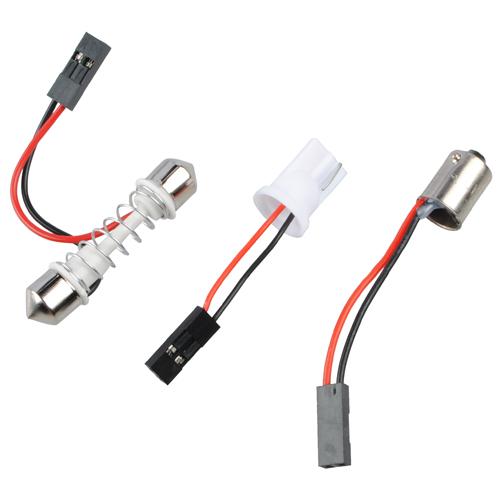 LED light bulbs are great for autos, RVs or campers because they last longer than incansescent lamps and they are not fragile. LEDs are not susceptible to vibration or shock, so they outlast standard light bulbs in harsh environments such as traveling in a vehicle or trailer.

Now you can enjoy many years of affordable, energy efficient light.

View some of our other articles:

No comments yet! Be the first: