First of all, there is no such a thing as white Christmas in Uruguay, for two reasons. The first one is that in this hemisphere is summer time, the second being that it never snows in Uruguay (a great deal of Uruguayans don’t know snow), so even if it were winter, it wouldn’t be white anyway. In hot summers here is more like sweating Christmas.

Santa Claus here is called Papa Noel, and his associates here deliver all the Christmas presents at 12’ o clock sharp. So children expect presents to appear right away under their noses and they are a tough clientele. Yes, yes, HoHoHO! For some weird reason Santa Claus has this weird way of laughing over here too, although here is spelled more like JOJOJO ;)

There are no Christmas vacations, school period goes from March till December, school has already finished a month ago. For working guys such as myself, the 24th is workable only until noon, and the 25th is a non workable holiday. Unfortunately this year both days fell in weekend days which sucked. 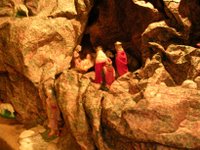 Preparations for Christmas’ eve and Christmas day include setting up your own Christmas tree. Some people like to have it natural, in such a case you have to go and get some pine tree somewhere, which is becoming uncommon. Another thing to do is to make one little holy manger usually within the fireplace, with ceramic figures, and rock paper. Some families also leave the little Jesus spot empty in the manger until Christmas day arrives. 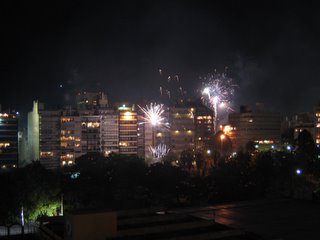 Christmas is celebrated typically in the following manner: families gather on a Christmas’s eve dinner, spend the evening together, until the clock ticks twelve. When Christmas day finally does arrive, everyone hugs each other, parents put up a children’s deceiving show telling them to look at some nonexistent star in the sky where Santa is supposedly coming from (here the north pole Santa’s elves factory thing is not very spread), also this scheme lends to several possible variations. While the children are looking at the sky after some decoy the other parent or some relative puts the presents beneath the Christmas tree, and shouts notifying of the sudden arrival and departure of Santa. Everyone else who is not involved in this children deceiving scheme may probably be playing with fireworks, making a lot of noise, lighting up the city, eventually getting a hand burned. 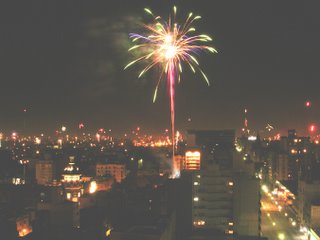 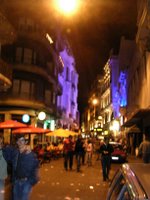 After all of this in Montevideo the two more interesting spots to be are “La Rambla” where people usually park their cars and put music real loud, dancing and drinking by the beach, or in ciudad vieja where there are a lot of pubs to hang out.