On May 25, 1977 the blockbuster movie, Star Wars, premiered.  Spawning 2 sequels and 3 prequels, Star Wars has had tremendous cultural impact, with Geek Pride Day celebrated on every May 25th (since 2006) as part of its legacy.  There is even a religious movement called Jedism. In the 100 plus years of motion pictures, some films have transcended mere entertainment and have influenced society as well as spawning successful sequels.  Here we list 10 of the movies we think are most influential, on American culture, not just on the film industry.  What films would you nominate?

Why does this television mini-series rank only #10?  Because is it a television mini-series and barely qualifies for the category.  Otherwise, it would likely rank higher, as the stirring saga of Kunta Kinte et al follows Africans taken from their pastoral life in Africa to the horrors of a sea voyage on a slaving ship to America where they are sold into slavery.  The anguish of families split up, whippings and maimings, humiliations, and a perspective most white Americans had not previously experienced brought home an epiphany of racial awareness of our history like no other film.  The series also instilled a sense of history in many African-Americans that had not been provided in schools, changing perceptions and attitudes across the country.

This film had a major impact on the film industry, hyping the movie with an unprecedented $700,000 ad campaign.  When that investment paid off with blockbuster results, select movies were the subject of enormous ad blitzes.  The film spawned a shark craze in the US that continues to this day, with shark sport fishing on outdoors shows and documentary type television programs regularly appearing on scientific and nature oriented channels.  We had already had loan sharks and pool sharks, but this film spawned the Land Shark of Saturday Night Live!

As described above, this film brought us pervasive allusions to “The Force” and other aspects of the movies.  With 6 incredibly successful films in the series, it is unlikely we have seen the last of them.  Spoofs, parodies, allusions, Geek Pride Day, the references are legion.  What used to be a “Knight in shining white armor” is now a “Jedi.”  Vice president of the US, Dick Cheney was referred to derisively as Darth Vader.  In a bit of a twist, Cheney and his family frequently refer to him themselves as Darth Vader!

Not the first color movie, it may have been the first color movie seen by many Americans.  Winner of 2 Academy Awards, the film made a star of Judy Garland, and the song, Over The Rainbow, is considered the best movie song of all time (by the AFI among others).  References to the yellow brick road, munchkins, the wicked witch, lions and tigers and bears (“Oh my!”) are just some of the everyday allusions made to this movie by Americans.  Cracked note: The film missed a chance at being even greater when the dachshund named Otto originally cast to play Dorothy’s dog was replaced by Toto, a Cairn Terrier.

This movie is significant for introducing rock and roll to the movie audience, prominently featuring Bill Haley’s Rock Around the Clock.  Teens dancing in theater aisles while the rock anthem played shocked adults.  It is also given credit for starting an era of teenage rebellion (triggering riots in Britain) and attacked the racial status quo by featuring Sidney Poitier as a good guy African-American student opposed to Vic Morrow’s portrayal as an evil Caucasian student. 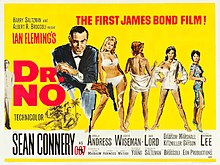 The first of 23 Bond, James Bond, movies, the character of super spy James Bond has come to symbolize what we perceive as suave and debonair.  How many millions of vodka martinis have been ordered shaken, not stirred, is attributable to this character, and Walther, maker of the .380 ACP PPK pistol owes much if not most of their sales to this franchise.  Spoofs, parodies, and copy cat films abound.  Men want desperately to be James Bond, and women want to be with him.  Starring across James Bond as a “Bond Girl” is a jump start to stardom for a young actress.  The movies have also provided many hit songs that have become part of American culture as well. 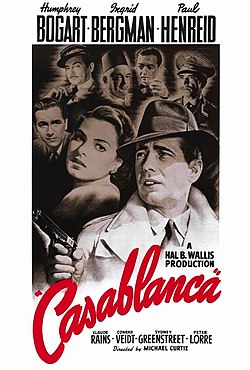 Ranking among the top five in numerous lists of the greatest movies, Casablanca is referred to as the most quoted movie ever.  With 6 quotations in the American Film Institute’s list of the top 100 movie lines, Casablanca is #1, with the runner ups (Gone With the Wind and The Wizard of Oz) having only 3 apiece.  One of those famous quotes is usually misquoted, “Play it again, Sam” is actually “Play it Sam, play As Time Goes By.” Parodies and references to the movie and the famous lines are thoroughly ingrained in American culture. For some reason this film is traditionally shown at universities during finals week (started by Harvard).  Here’s looking at you, dear reader.

This low budget zombie classic was not the first movie featuring zombies, but it became the prototype for what is today an immensely successful genre of films.  One of televisions most successful shows is The Walking Dead, which is so successful it has a show about the show!  Zombies are popular as Halloween costumes and anti-zombie rifle and pistol ammunition is sold as Zombie Max. There are even zombie hunting licenses, zombie repellent, and zombie ammo cans for your anti-zombie bullets for sale.  Cracked note: The movie does not call the undead “zombies,” but calls them “ghouls.”

Linda Lovelace and Harry Reems bring adult cinema out into the open. For the first time, widespread knowledge of adult film stars and a particular sex film became commonplace, greatly speeding the acceptance of adult cinema into mainstream America.  Of course, that did not happen overnight, but this film was the first adults only blockbuster and had people formerly unfamiliar with this genre discussing the film in normal conversation.  The film probably had somewhat of an impact in the acceptance of sex acts other than standard intercourse as well.

When this movie was filmed, 17 states still had laws against interracial marriage.  Shortly before its release, the Supreme Court struck down those (anti-miscegenation) laws.  The movie features the beloved pairing of Spencer Tracy and Katherine Hepburn as the (Caucasian) parents of Katherine Houghton who brings home her fiancé,  Sidney Poitier (African-American).  Against the backdrop of the racially charged 1960’s when race riots were commonplace, the film was a surprising success, drawing crowds even in the South.  The handsome Poitier played a doctor with conventional “white” speech and mannerisms, obviously intelligent, successful, and charismatic.  This film helped break down the social mores against racial stereotypes and started ever so slowly the acceptance of interracial relationships.  A remake of the movie in 2005 reversed the racial roles with Bernie Mac as the African-American father reluctant to accept Ashton Kutcher as his white son-in-law.  If there is any doubt that attitudes have changed in the US, the election of bi-racial Barack Obama as president certainly stands as testimony that change has occurred.  Nominated for 8 Academy Awards, the film won 2 of them.

If you liked this article and would like to receive notification of new articles, please feel welcome to subscribe to History and Headlines by liking us on Facebook.

Your readership is much appreciated!